Jordan Smith, a senior at Liberty University in Lynchburg, Virginia, has contributed to Living Letters on several occasions. After an unusual college experience during the COVID-19 pandemic, she reminisces on why she chose a journalism major and shares her hopes and plans as she prepares to launch her professional career.


How does God lead us into the right career paths? How did I come to believe that journalism was right for me? I wasn’t completely sure myself when I arrived at Liberty as a freshman nearly three years ago. I wasn’t even sure that studying at Liberty would excite me. Up to then, journalism had been one of the greatest joys of my life and I hoped that college wouldn’t diminish my aspirations. Now as my college days draw to a close, I am happy to say that choosing journalism, as well as attending Liberty University, have only increased my enthusiasm to continue to work in this field.


There are several factors that led me to choose journalism. If you’re familiar with the current state of news and the public’s opinion of the media, combined with the fact that the pay is nowhere near the top of the pay scale, you may wonder why anyone would make such a career choice.  However, over the course of my life, so many doors and avenues have been opened for me that to not choose journalism would seem inauthentic. For me, those doors and avenues reinforced in my mind that I made the right choice.

“ How did I come to believe that journalism was right for me? I wasn’t completely sure myself when I arrived at Liberty as a freshman nearly three years ago. ”

The key to my story is that I have always loved to write. I can remember in first grade deciding that math was my least favorite subject, science a close second. That changed little from my first day of school to my last day of senior year of high school. I loved to read. I mean, I had a full stack of library books on my nightstand always. That love of reading poured out into a love for writing. I was like a sponge; what I soaked in from reading eventually was wrung out of me in what I wrote. In retrospect, one of the ways I developed my voice as a writer was first reading. Fiction was my first love, but I would read just about anything I could get my hands on, which led my mother to have to be very stringent about what reading materials came in the house.


As a little girl, I kept journals and diaries to document my days. There was nothing particularly special or unusual about my childhood. I grew up on a cul-de-sac in Lancaster, Pennsylvania, with Christian parents who homeschooled me. But it was fun to tell my diary just how I was feeling each day, even if I couldn’t express it verbally to anyone. There were many nights I would stay up late writing and/or reading, much to my parents’ chagrin.


I never outgrew those passions of reading and writing. My mother really pushed me when she figured out that I was good at those things, so I took a lot of writing courses and grammar studies. It was a bit dry at times, but all in preparation of the career I have now.

“ I never outgrew those passions of reading and writing. ”


Another related passion that I am glad I did outgrow (for lack of space and funds) was collecting magazines. I didn’t realize that this habit of collecting magazines would be so influential to me until this year, actually. But I was obsessed. I would go to the Mennonite-run thrift store in my town, where they sold slightly outdated magazines for 25 or 50 cents apiece. All the lifestyle and home magazines would be gone by the time I left the store. I had purchased them.


To put it simply, I was a bit of a magazine fiend. It wasn’t only the stories that captivated me. It was the pictures, the layouts of the pages, the bright graphics. Magazines combined some of my favorite things: interior design (my career dream as a child), reading, and telling stories.

I was eight years old and I had bins and stacks of magazines all over my room. When I think about it now, it makes me shake my head. I suppose there are worse things to be interested in as a child, but it was definitely a strange obsession. Nevertheless, it was a neon sign pointing straight to journalism. Did I see it? No, but now I do.

Another key aspect about me that I feel is central to my story is the fact that I was too curious for my own good (read: nosey) and could read between the lines to figure out what was really going on. Let’s preface this example by repeating the fact that I was homeschooled and some days I had a lot of free time on my hands. What would I do with that free time? Find the Christmas or birthday presents that my mom was accumulating for me and that she had purposely hidden, of course. I would snoop around the house until I found them – and I always found them! Then I would tell her that she should find a better hiding spot if she wanted the presents to be a surprise. I was definitely a fun child to buy for.

What’s more is that I could decode the conversations that my mom and her mom (my grandmother) would have in front of me. They would use certain code words or euphemisms to hide things that weren’t appropriate for me or that they didn’t want me to hear. Don’t get me wrong, it was right of them to do that. Not everything was appropriate for me to hear. But I figured it out anyway.

So, I was a curious, reading, writing, magazine-loving, little girl. My career goals ranged from fashion designer to astronaut to dentist to author to interior designer. Yet none of them thrilled me. As I made my way through elementary, middle and then high school, I started to think more seriously about what I wanted to do with my life. Questions such as “What would make me happiest?” and “Where do I see myself in ten years?” started to pop up in my head. Of course, the ever-present “What does God want me to do?” stayed there, too.

When I was fifteen or sixteen, I distinctly remember coming downstairs to talk to my mom, who was sitting on our back deck reading. It was summer, and I think I was off of work that day.

“ I didn’t want to go to a Christian school, I said. I was homeschooled. It was time to see the world. ”

“Mom?” I said. “I think I should be one of those people who interviews the famous people they feature on magazine covers.” I went on. “Because, I’m really good at writing and it seems fun.”

Her response was encouraging. “You’d be good at that,” she said.

From there, it was almost settled (I was a bit dense). What if I wanted to pursue graphic design, another interest of mine? The more I researched that route, though, the more I realized that I did not love creating enough to be happy doing that. Graphic design is much more technical than people think and requires more planning and thought than I would have enjoyed.

Nonetheless, I doubted myself. I applied to a number of schools, both in state and out, some for journalism and some for graphic design. Syracuse University was my first choice. A well-known J-school (journalism school), it has connections with some of the best publishers and writers in the country. I applied to others, all secular. I didn’t want to go to a Christian school, I said. I was homeschooled. It was time to see the world.

God said, as He does often to us, “not yet.” I was accepted at schools I didn’t really want to go to and couldn’t afford, and waitlisted (and then rejected) from schools that I did want to attend and still couldn’t really afford, but it was okay because I could get in their honors programs (maybe). Finally, exasperated, I applied to Liberty in November of my senior year. Their application process was easy. I got in. I had never toured it, so I did that in April.

By then, all of my other options had been exhausted. I reluctantly decided on Liberty. Let me clarify here: I know that some students dream of being able to attend this Christian school near the Blue Ridge Mountains in Virginia. It was not my dream. I did not know anyone well who had gone here. My parents had told me numerous times that they did not feel comfortable sending me to a college five hours away. And Liberty University was not a journalism school by any means and I didn’t know anyone there.

Yet I made all the arrangements and I went. I learned to love it, even if I didn’t agree with everything that leadership did. I have had some of the best times and some of the worst times here. I have learned, loved, and had some awesome opportunities (including getting to travel to Ecuador, which you can read about here).

I studied journalism! I wrote for the school newspaper. I met a pretty awesome woman at my church named Susan Perez who asked me if I wanted to write for her blog. I was a copy editor at the school newspaper and am now the feature editor. As the copy editor, I put into practice the rigorous writing and grammar courses that I learned so many years ago. As the feature editor, I get to use a lot of magazine techniques from my collecting days. In addition, I wrote a ton for my classes and made so many multimedia projects. I told a lot of stories, both good and bad.

“ I see so many ways that the Lord has been faithful in leading me to where I am now. ”


As for my future plans: I will be working remotely as a copy editor for a newspaper in Casper, Wyoming from March until May. In late May, I will be moving to Wyoming to do an internship with that newspaper. I can’t say for sure what will come after that. I know what I hope for. To stay at that paper for a few years, and then figure out what I want to do after that. For now, I’m content with having an internship, and very excited for it.


The journey to this moment has been long but very fun. As I reflect on my childhood, I see so many ways that the Lord has been faithful in leading me to where I am now. I love to remember how reading and writing were the first true signs that journalism was right for me. A part of me wishes that I had kept the stacks of magazines, for memory’s sake. The better, larger, more organized part of me says, no, they were taking over your room. As for my curiosity and ability to read between the lines—I don’t think they ever left. I just learned to use them in a more productive way.


We will be checking back with Jordan in September to see how her internship went and what she will be doing after it. I’m sure she would appreciate your prayers as she begins her work for the Wyoming newspaper this month and then travels there for the summer. May God be with you through all of this, Jordan.


Below: Jordan (left) and Charity Fitch (right) staff members of the Liberty Champion, pose in their office. 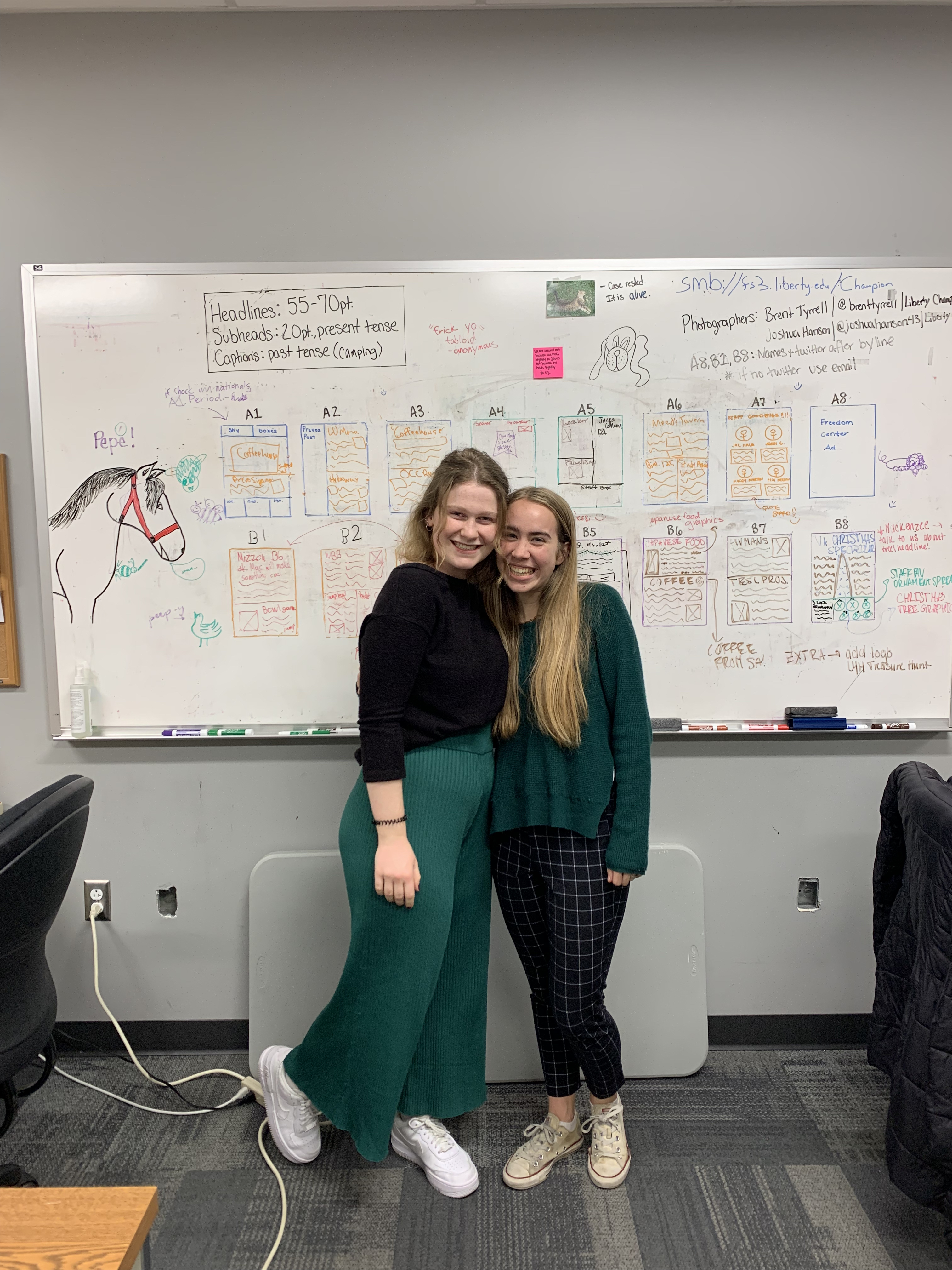 Below: Jordan’s first published article in the Liberty Champion. 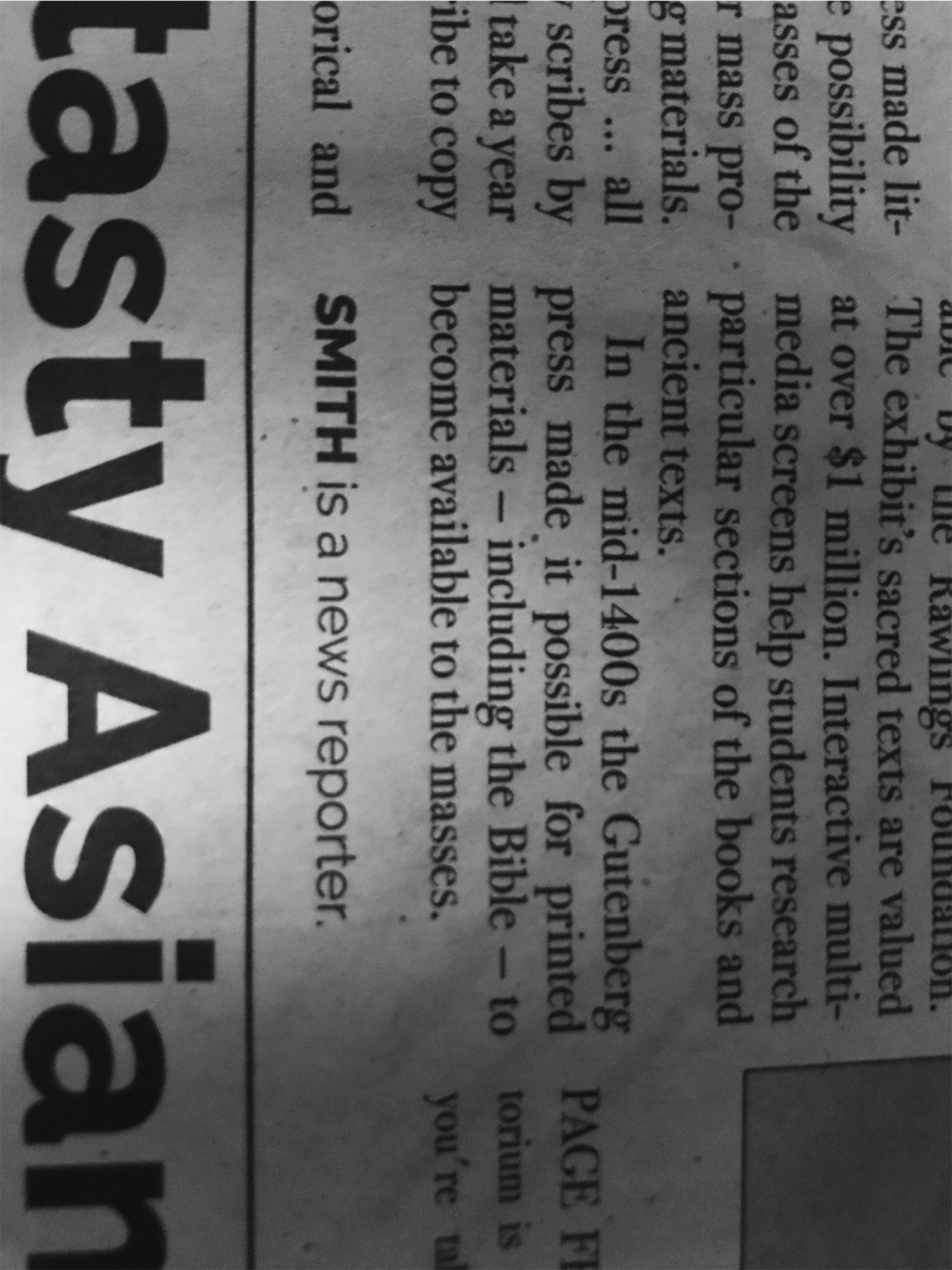 Send Me A Message